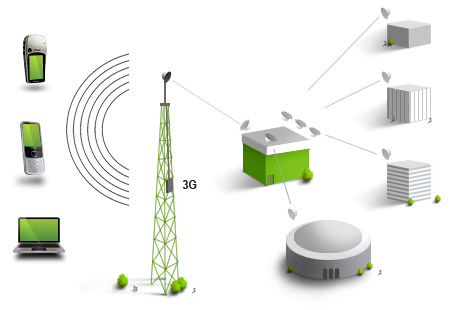 While cat videos, memes and the various other clips and images shared via the Internet provide endless hours of viewing pleasure, they are creating a stress on conventional wireless networks. They produce a huge demand for wireless capacity that cannot be satisfied simply with increases to the existing spectrum.

“According to industry projections that are widely quoted, mobile broadband data demand will grow by a thousandfold between 2010 and 2020,” said Upamanyu Madhow, a professor in UC Santa Barbara’s Department of Electrical and Computer Engineering. “We are in the middle of this period, and wireless carriers and equipment providers are scrambling to come up with solutions.” The demand, he said, is driven by bandwidth-hungry multimedia applications, such as streaming services, games and cloud storage, as well as web conferencing and remote desktop services. Should the network become overloaded, Madhow noted, users of these apps would experience the familiar and very frustrating slowdown of service.

However, with the help of $2.4 million in funding from the National Science Foundation, Madhow and fellow UCSB researchers Jim Buckwalter, Mark Rodwell and Heather Zheng, along with Amin Arbabian of Stanford University and Xinyu Zhang of the University of Wisconsin-Madison, plan to investigate an emerging approach to wireless connectivity. Their research focuses on what is called the “millimeter wave band,” an area of the electromagnetic spectrum that operates at a much higher frequency than the radio waves used in conventional wireless communications.

“Frequencies from 30 to 300 GHz are termed ‘millimeter wave’ because their wavelength is of the order of millimeters,” explained Madhow. “Current wireless systems operate in the 1-to-5 GHz range, with wavelengths of the order of centimeters.” Not only would the tiny wavelengths offer additional real estate on the electromagnetic spectrum but their relatively smaller coverage area (called “cells”) lends itself to better efficiency.

“The millimeter wave spectrum is a vital component of the next generation of wireless standards, which are being called ‘5G,’ and we at the National Science Foundation have been funding extensive fundamental research in this area over the past three years,” said Thyaga Nandagopal, NSF program director for the Networking Technology and Systems program. “This particular collaborative project involving multidisciplinary researchers across three institutions aims to demonstrate the feasibility of a large-scale millimeter wave wireless data network that can operate at gigabit speeds.” The goal, he added, is to develop the technology by realizing innovative ideas that span circuit design, signal processing, network protocols and communication architecture.

The change in wave scale, however, also means a rethinking of existing wireless infrastructure design principles. For instance, millimeter waves are easily attenuated by relatively small objects, such as human bodies, in addition to the larger objects that are known to interrupt signals in conventional technology, such as buildings.

“Today’s millimeter wave technologies have limited applications, mainly for indoor cable replacement, and very recently outdoor static backhaul networks,” said Zheng, who is an associate professor in the Department of Computer Science.. “We believe it has much broader potential and there are many applications to be discovered.”

To get around the issue of obstruction, one solution is to employ steerable, highly directive antenna arrays, which can be miniaturized to scale with the wavelength. It is possible to develop a thousand-element array that could fit in the palm of one’s hand, according to Madhow. The smaller cells may even prove a benefit, as they lend themselves to rapid reuse of the spectrum, which is key to delivering the thousandfold increase in cellular capacity that is being sought. Large obstructions then become beneficial, as they would prevent interference from other wireless transmissions in the area, he added.

“Our highest priority, therefore, is to explore fundamental design issues related to adapting arrays with a large number of antenna elements in a highly dynamic environment,” he said. Other research efforts may investigate solutions for reduced power consumption and scalability of manufacture.

The researchers have already experimentally demonstrated that 60 GHz communication radios can add physical bandwidth to data centers and either augment existing wired links with flexible, high-speed wireless connections or construct low-latency control networks that provide robust paths decoupled from the wired network, according to Zheng.

Because this emerging technology for wireless communications is still relatively new, significant research is necessary in a number of areas — including hardware design, algorithms, and network protocols, together with experimental validation to stimulate transition to future industry standards — before the next generation of wireless devices can be developed to take advantage of the millimeter wave spectrum.

“Millimeter wave is the Wild West of spectrum,” said Buckwalter. “There is 100 times the bandwidth available at radio frequency bands but almost all of this is untapped for commercial markets. So we are about to enter a ‘gold rush’ of sorts. This is a completely new technology that will require billions of dollars of development from industry to bring to the marketplace.”

SOURCE: The University of California